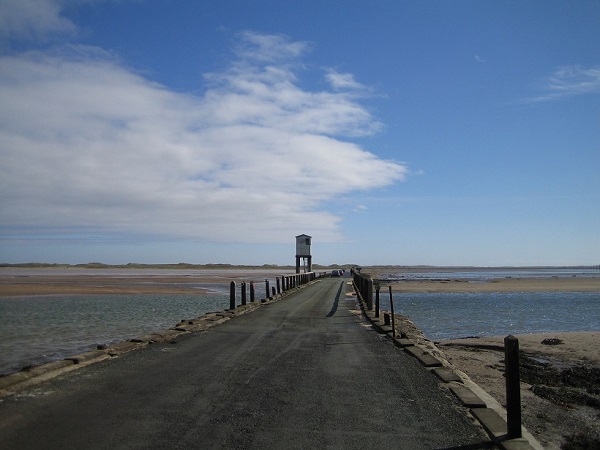 These were my thoughts as we were walking across the three-mile Causeway towards the Holy Island, or Lindisfarne as it’s often known. It was a crispy cold, but sunny late summer day. The wind, the strong air, the iridescent waters around us and the lack of food (we’d been too excited to eat) made us feel dizzy and light. It was as though we were fasting, giving up something – perhaps our pride – to seek the Other for a change. And it was this effort, this sacrifice, which helped us cross over into the new world. We didn’t know it yet, but by the end of the one-hour walk back, later in the evening, we would indeed experience a blessing upon us, just like in Czeslaw Milosz’s verse: “I felt the hand of God on my shoulder… and yet, it didn’t threaten punishment; and yet, it didn’t promise reward.”

Nobody knows what Lindisfarne means, which adds to the mystery of the place. After a hot drink at the Pilgrim’s Café, we went to see the Priory, an otherworldly tranquil complex dating from Norman times, built on the site of the Anglo-Saxon monastery founded after St Aidan visited the island, in AD 635. What is left of it now is in fact a Benedictine priory, built after the original was destroyed by the Vikings.

A short walk away from the priory is the Lindisfarne Castle. The old fort stands on a steep hill, right at the edge of the island, like a sharp reminder that peaceful waters are not always what they seem. The moment you step inside you feel the hand of history upon you – and the fact that you have to lower your head to walk in is, I believe, part of the lesson…

But the Holy Island is not the only attraction in the area. We stayed in Bamburgh, a small village by the sea, which used to be the headquarters of Oswald, the king who invited St Aidan to bring Christianity to this part of the world. In the evenings we were watching the sunset on a sandy beach, which stretches below a 13th century Church and a Norman castle where the kings of Northumbria used to live, one of the most impressive I had ever seen.

From there we drove to Alnwick, less than half an hour away. I couldn’t wait to visit Barter Books, allegedly the second largest bookshop in England. And because we spent half a day between the shelves of the old railway station, we had to choose between visiting the world-famous Alnwick Garden, and the castle. Couldn’t do both. The garden exceeded all my expectations – with its labyrinth, fountains, and Treehouse.

I would have liked to go see Durham again, where I had once spent some of the best days of my student life, or visit Berwick, the historic border town, for the first time. Instead, we opted to spend an uneventful on the shores of the North Sea, under the mysterious lights of the Bamburgh Castle. It all felt like a blessing, which was as hard to put into words as it was unexpected.