On our love for books 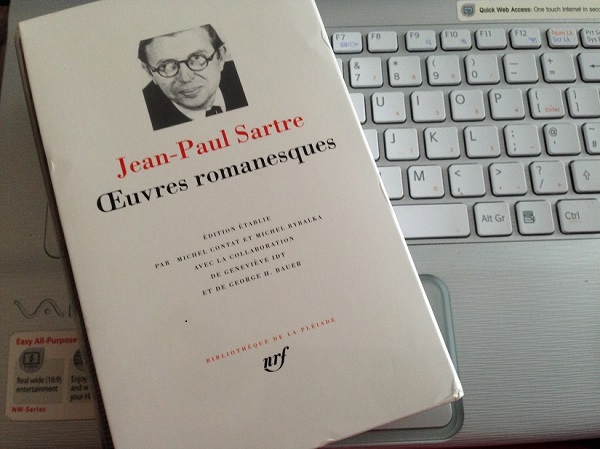 On our love for books

Books are like lovers. If you abandon them, they take revenge. And they always win.

It was a magnificent day in Paris, two days ago, and my return train to London was leaving in three hours. I was in a hurry to get back to the hotel, collect my stuff and head to the station. Just before turning onto Rue Vaugirard, a bookshop springs out from nowhere, right under my nose. I would have perhaps managed to ignore it, in the circumstances, had it not been for the tables outside. So clean and tidy at the front, more messy and grey at the back. The usual mix of literature – old and new, leather-bound and scruffy. The philosophy books were leading the show, right in the front row, and unbearably white. Collection: Bibliothèque de la Pléiade. Sartre, Camus, Platon. Coup de foudre, without a chance. I take in the view and try to focus my sight and my mind on as many individual books from that row as possible. As it turns out, my focus range is not something to boast about – so after a few moments of panic, I stop at Sartre. Oeuvres Romanesques published by Gallimard in 1982. It includes Nausea, the four volumes of Ways to Freedom, some extracts from his diary, and fragments of his correspondence with Simone de Beauvoir. (See below).

I hold it and I realise that I don’t just like this book, I love it. Without even looking inside it. The price is high, and there is only one copy of it – and it is not a new one. That wouldn’t normally bother me, if only I had more time to explore it, to ‘get acquainted’, establish a rapport before becoming partners forever. But time I don’t have. So I decide to do ‘the sensible thing’ and walk on, resist buying it on an impulse. And through some miracle, I actually do. I put it down and I move on. I manage not to look back. Although with every step I take, I feel the distance increasing between myself and the book – as though it were the only one on earth, the last one I would ever hold in my hands. It was painful – and unnecessary, because I had the money and the time required to pay for it and walk away with the book in my hand. I just didn’t. For some odd, uncanny reason, I thought that it would be sensible not to buy the book in a hurry, to just focus on what I was supposed to do – walk back to the hotel, get my stuff, and head to the railway station. Strange mechanism this preconditioned kind of mental state. It’s almost as though our mind works against us, as full-bodied, full-souled people.

On the train, I tried hard to forget about the book I’d left behind, and focus on those I had with me – one brought with me from London, three new books and four philosophy magazines I’d bought the previous days in Paris – and all the electronic articles and notes from my iPad. I manage, but only somewhat. It is hard to ignore the conviction that, if the train hadn’t already left the station, I would have gone back to the bookshop and bought the book.

I also thought that, once back to work the following day, I’d be too busy to remember the book. And it’s true – the first day I was too busy to do anything about it; but not too busy to keep thinking about it.

The second day I did it: I bought it online (for more than it would have cost in Paris, of course). And now I have another two weeks of waiting. Maxim 17 days, to be precise. (It should arrive by the 15th of September). Ordered yesterday, dispatched this morning. I should perhaps write a journal d’attente. Watch this space.

My incantations must have helped, since the book arrived eleven days early – on 4th of September, while I was at work. They left it with our neighbours, who have two young children who must have been asleep by the time I arrived in the evening, so I had to wait another day in order to claim it. But after all the way, on a beautiful afternoon (the 5th September 2014), the book and I were finally reunited. Or introduced, I should say – since this was, of course, a different copy from the one I’d seen in Paris. Much more expensive too, according to the label on the box. I was so excited to finally hold it in my hand that I couldn’t yet focus on the content. I weighted it in my arms, and I took it all in – the beauty of the edition, delicate and sturdy at the same time. According to the last inside cover, I was holding volume number 295 of this precious Pléiade.