Heidegger in the fields of Eastern Europe 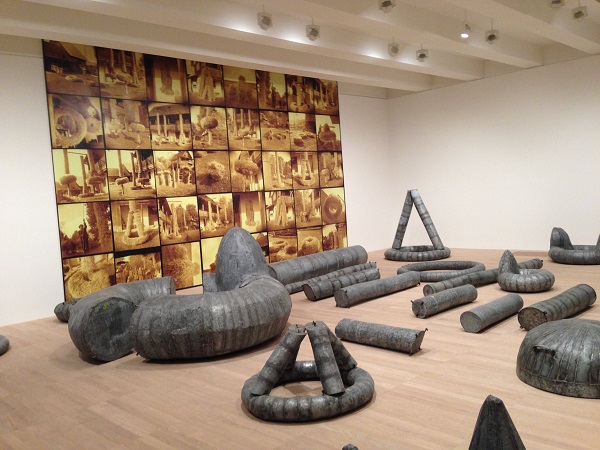 Heidegger in the fields of Eastern Europe

There are many surprises amongst the exhibits at the New Tate Modern, ranging from soap bubbles and sculptures made of couscous to blank walls and capsules to lie in; what they all have in common is a certain extravaganza – one way or the other, they push the boundaries of what we call modern ever further and further. To me, the real surprise is a gaze into the past. An exhibition by the Romanian artist Ana Lupas brings together images and installations of items and materials from rural Transylvania, as it was half a century ago: wheat, cotton, wood and clay are the main characters in a display of ochre and grey.

It has taken the artist and her team over forty years and several alterations to reach this stage in her project, titled The Solemn Process. Initially focused on the annual production of large wheat wreaths (produced in the countryside by a group of villagers), the project soon became a restoration project, because the original structures started to deteriorate due to the vulnerability of the main material used – wheat. So the wreaths had to be encased in metal structures, in order to be preserved.

This is what we can see now, in the Switch House building – a display of large, grey structures, cold on the outside, but warm on the inside, as they cradle forty-year old wheat wreaths from the Romanian countryside half a century ago. From a long-forgotten land somewhere ‘beyond the woods’ (the name comes from Latin ‘trans’ and ‘silva’, forest), crushed by the horrors of the communist regime, Transylvania suddenly shows itself as a mirific landscape and home to warm, self-sufficient and family-oriented people. The range of utensils from the photographs on display would certainly inspire Heidegger to write another volume on the Origin of Art; the wheat wreaths would be right up there, next to Van Gogh’s peasant shoes. But he might keep the title, as there is certainly solemnity in this process of recapturing the past, through a combination of what is ‘ready-to-hand (the equipment – metal, boards, camera) and the ‘presence-at-hand’ that pertains to the human being. A whole new world opens up between the beholder and a few instruments from the past.