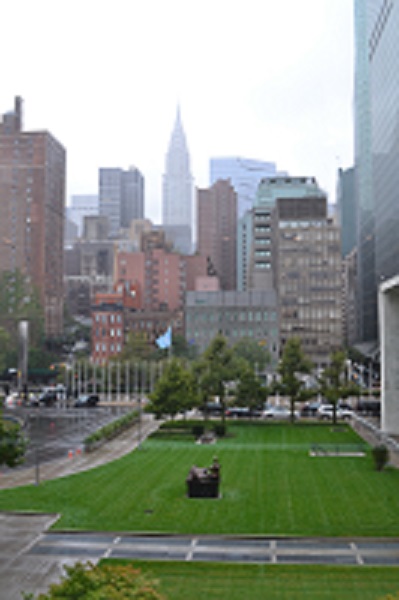 One of our much circulated cliches about time is that it “forgives no one”. The idea behind it, of course, is that we become older and unhappier, with every day that passes. But why should the two be correlative — age and unhappiness? Why should we assume that getting old is some sort of punishment? If I had a dime for every old man or woman I met, who had a permanent smile on their face…

Having just spent a week in New York, 15 years after my last visit there, I am definitely happy to experience the city at a different age. It’s almost like a love-hate relationship; or a life and death situation – the intensity of it, the multi-faceted experience.

Milosz says in one of his poems that once he met God; and was surprised to find that He neither threatened punishment, nor did He promise reward. Time is like that, too. It falls beyond our usual normative ‘ism’s. The city talks to you differently, 15 years later. It reveals different wounds. Starting with simple things. Like the way buildings and pavements look, and the marks they carry. For instance, the striking association between two types of stairs — those for external fire escape, ‘decorating’ so many of the city’s buildings, and those to the basement, which can be seen in front of almost every shop, restaurant, cafe, or bar. I never noticed this 15 years ago, despite the fact that at the time I spent nearly four months in the city. And now, in just one week, I find it so fascinating, so unescapable, that I cannot help thinking about it as a hallmark of some secret ‘alternative’ city within the city. Stairs falling down into the bowels of the underworld, or stairs shooting out to the sky. Whatever we see has a flip-side; wherever we go, the destination is staring back at us with a deeper look.

And neither people, nor institutions are any different. They seem welcoming at times, whilst stepping back at the last minute. Inviting you in, and politely sending you away in the absence of a pass card. And I embrace these apparent contradictions as just another sign from a much loved and forever withdrawing city.

Finally, this time around, New York seems to have a much more existentialist character. I can easily imagine setting up an existentialist club here — and I don’t mean it as a fashion trend. I can see us (my students, anyone?) debate my radical ethics project, or Heidegger’s later turn, and what it tells us about philosophy and — more importantly — about ourselves. The flow of thoughts happens to be much deeper on a clear, wet New York afternoon, out in the open, than on so many visits to a number of Continental libraries. Granted, this might only tells us something about the freedom of thought, rather than the city itself. And yet, there is something inherently existential about New York, something I never fully appreciated 15 years ago.

Time has nothing to forgive, just so much to give us.