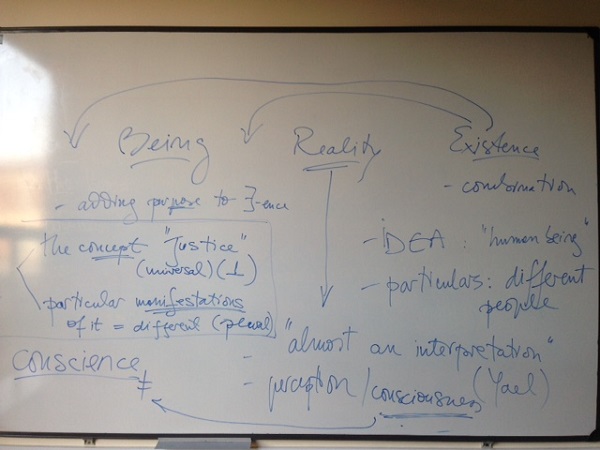 At the beginning there was wonder. Or so the story goes, according to ancient wisdom, about the beginnings of philosophical enquiry. Then, there was one question mark – followed by another. A dialogue, or a disagreement. Two words, or maybe three. An eyebrow or a pair of shoulders raised. A laughter. An excuse. Some severe looks, a frowning here and there.

Our Intro gang meets twice a week in the airy ground floor classroom, looking out to the quod, and we have a cocktail of everything – from wonder to laughter.

One of the latest topics on the menu – reality. We spent a glorious first hour discussing what it may be, and how it might differ from being, or existence. Yael offered the cherry on the cake, when she said that, by contrast to being, reality is “almost an interpretation”. Luca and Aasim chipped in, with suggestions about what a difference perception makes, and how conscience differs from consciousness.

It was, all in all, quite a feast. If only Sophia had been there, the joy would have been complete. But didn’t we all feel, at one point or another during the session, the touch of an angel negotiating its way amongst our chairs and desks?!

Since then, we’ve travelled to Plato’s cave, which some of us rightly compared to the post-apocalyptical world in The Matrix, we covered our eyes and ears, trying to see beyond appearances and the noise of every-day life experience; we wondered if Brat Pitt knew from the beginning whether he was fighting for the truth or for an illusion (in Fight Club); we pondered, with Descartes, whether the source of our perceptions might be within ourselves or somewhere outside our mind (and body), and if it could be a God or a demon [the jury is still out on that, but there is unanimity with regards to the various substances and their degree of self-sufficiency]; finally, we’ve been following the path towards Heidegger’s hut, wondering what might happen to Being on a cloudy day…