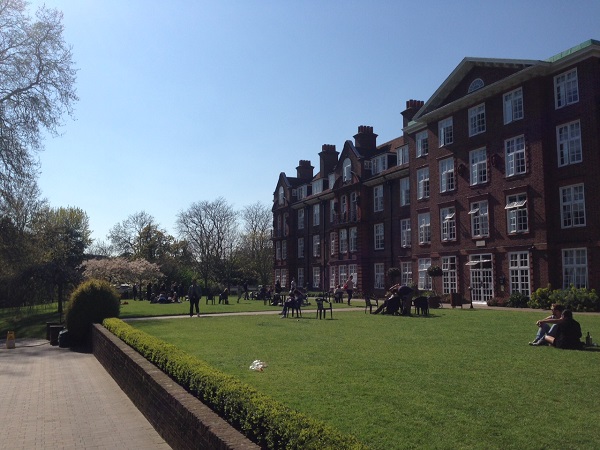 Some two thousand four hundred years after deciding to drink the hemlock tea to sweeten the taste of democracy, the spirit of Socrates is still haunting the streets of Athens, in search for answers about what is justice, morality, and how best to achieve them. Since what he sees in the Agora these days does nothing to convince him – in fact, it only confuses him more than the Peloponnesian war did – he decides to explore other lands, in search for some inspiration. One mild November day, he happens to hover above a bee-hive type of city, somewhere on an overcrowded, overcast Nordic island, and he spots a green oasis right in the middle of it. As he descends towards it, that turns out to be a royal park, so the spirit of Socrates decides to take a break there for an hour or two. But as he lowers his wings and starts walking, he notices what seems to be like an agora in the middle of the oasis, with many different looking people walking, talking, sipping coffee and carrying on conversations in multiple languages, on oddly diverse topics. He cannot resist the temptation, so he decides to eavesdrop on some of that. Strangely enough, the place turns out to be some kind of school, oddly resembling what his pupils were trying to achieve, except with a large number of ‘metics’ engaged in discussing what seemed to be an infinitely wider range of topics than he himself had ever managed to address. Here are but a few fragments of conversation, which attracted his attention as he wandered about on the beautiful lawn.

Lina: What is freedom to you?

Abdel: Absence of restraint and judgement.

Lina: Restraint is obvious, but why judgement?

Abdel: Because there are norms that you must respect, which means you have restrained (from something).

Lina: Yes, I know what you mean, but I did not know it before.

Abdel: Do you think that someone who has restrictions on law is free?

Abdel: So we agree that absence of restraint is necessary for freedom?

Abdel: Is there just one form of restraint?

Lina: No, there are more.

Abdel: Can we identify all forms of restraint?

Abdel: If we can’t identify all forms of restraint, then how can we know for sure, if there is any absence of restraint?

Lina: There is no obvious answer.

Abdel: But perception of freedom exists?

Lina: Yes. But what is the purpose?

Abdel: There must be either external or internal forces to push a self to believe it is free.

Lina: Would that be a fake freedom?

Socrates wonders how many more Peloponnesian wars it must have taken for these youth to have become as liberated as that. So he walks on, determined to try and ascertain if other dialogues might display an equally clear open-mindedness in interlocutors.

Johanna: Ashley, I don’t understand the point system of basketball.

Ashley: You already know it from watching TV and observing the games.

Johanna: No, I’m pretty sure I don’t recall anything.

Ashley: If a person gets fouled while shooting and doesn’t make the shot, how many free throws do they get?

Ashley: How much is a shot in the key worth?

Ashley: Outside the three point line, how much is a shot worth?

Ashley: If a person gets fouled while shooting and makes the shot, how many foul shots do they get?

Ashley: If the other team is over the foul limit and fouls the other player, it’s called one-in-one, so what does one-in-one mean?

Johanna: If they miss the first shot, they don’t get the second. But if they make the first, then they get to take the second shot.

Ashley: See, you know the point system of basketball, we just had to recall it. Don’t doubt yourself, knowledge is power.

By this time, Socrates is beside himself, in awe at the results of his own method, which almost make him redundant, so he is starting to contemplate an athletic career instead.

Maria: How about we discuss art.

Nicholas: What kind of art would you like to discuss?

Maria: The 18th and 19th century art, like Gericault for example. Will that do?

Nicholas: Actually I don’t really know that much artwork.

Nicholas: Never mind, let’s discuss art after all. How do you interpret art?

Maria: You can connect it to historical events.

Nicholas: Why is art so relatable to history?

Maria: Because it captures a certain moment in time.

Nicholas: Can you give an example?

Maria: Sure, the way in which French revolutionary paintings capture liberty.

Nicholas: Can we talk about artistic style as well?

Maria: Sure. What do you think about neoclassicism?

Nicholas: It reinterprets the past using modern techniques.

Maria: Yes, that’s what it is, but what is it that you like about it?

Nicholas: I guess the way that society echoes its ideals.

Maria: Do you still like the style even though it is very unemotional?

Nicholas: Yes, because it sorts of portrays instability.

Maria: How is it unstable?

Nicholas: Well, the French Revolution had lots of neoclassicism to it.

Nicholas: Yes, I guess so.

Maria: Does that mean you like Romanticism more than neoclassicism?

Nicholas: Not necessarily, they are just expressing different ideologies.

Maria: What kind of ideologies?

Nicholas: Because it is more dramatic and interactive.

Maria: Would you say that you like Romanticism because it shows what you are? Or what you are not?

At this stage, our Socratic spirit gives up, realising that he had some serious homework to do before the next art-loving enquiring mind comes along and – who knows – stops him for a chat.

Kick the Bottle (on Good Health)

John Doe: I’m sorry this was such short notice.

Doctor: That’s quite alright. So, how are things?

John Doe: They’re okey. I guess. Could be worse.

Doctor: Well, what exactly is “okey”?

John Doe: I haven’t been seeing my friends much anymore.

John Doe: I’m not sure what you mean.

Doctor: Think about it. Where’d you last see them?

John Doe: Well, I guess the last time I saw them was for Teddy’s birthday and that was at the bar…

The Doctor smiles at John. John looks down acknowledging what he just said.

Socrates is deeply divided over this. Part of him believes that wine is as necessary to an enquiring mind as a spouse like Xanthippe. The other part agrees with the doctor. But he prefers not to solve the dilemma today – so he walks on before anyone gets a chance to ask for his opinion.

Half Empty Half Full (On what makes something what it is)

Anna: Do you see this object? (She points to her bottle of water).

Anna: Do you know what it is?

Anna: Do you know the function of this object?

Anna: Can this object be of any size?

Yasmin: Is there some liquid inside this object?

Yasmin: What kind of liquid is it?

Yasmin: Can there be any other liquid in this object?

Yasmin: How much is the object filled with water?

Yasmin: What would happen if you filled the bottle with too much water?

Anna: It would overflow.

Yasmin: Do you think this applies to all of what this object is?

Yasmin: If I were to dump out half of the liquid, how full would the bottle be?

Yasmin: If I were to dump out all the liquid, would the bottle still have the same function?

Yasmin: What is this object?

By this time, Socrates was starting to feel more like his old self again, so he decided to walk on and get some rest. Philosophical investigations in the royal park had proven to be a most entertaining, albeit exhausting pursuit.